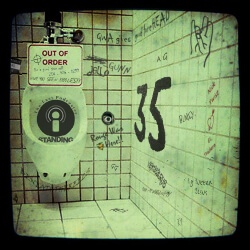 TLPS: Out Of Order

In this, the 35th episode of The Last Podcaster Standing,

Most often in the write-ups I do for each episode, I attempt to use humor and wit to inform you in part, of what the topics and headlines we discuss are in the episode. This time around however, I thought I would change it up and tell you rather instead about the episode title used this week: “Out Of Order”. As a general rule of thumb, our titles are often a play on words of moments or headlines that occur within the episode. “Out Of Order” is not one of them. This title was chosen for what you don’t hear, and in fact, has a double meaning. The first is “out of order”, as in broken. As in not working. An example being Skype. During this episode it kept dropping both the The Google Goddess and our guest @MoseDogg. Not once, not twice, but around 7 times. Yet we continued on, in spite of my juvenile temper tantrums to just quit for the night. And yes, that actually was recorded. Another example of “out of order” (in context of being broken) would be AT&T, which wasn’t working, which would also explain Skype crapping out. We tried, and would like to blame it on @MoseDogg and his 1986 dial up phone modem, but then we’d be lying. The third and final example would be human error. After countless technical difficulties and incessant interruptions, the only thing left to go “out of order” was me. Mentally broken. You’ll note something peculiar in the intro stories. Like us, laughing. A Lot. A lot more than the stories being told call for. The reason for this… We had already told the stories. I, being mentally “out of order”, due to the nights difficulties, had forgotten to hit the RECORD button, after pausing it countless times. And that kids is just the beginning.

The second reason for the title was because unlike other episodes, I had to stitch this s*** together like Frankenstein’s monster. Recorded “out of order” and covering mistakes and technical failures required the episode be cut and shifted around like a puzzle. Which I have never had to do before so… Fingers crossed! And now you know. Coming in the next few weeks I will be releasing clips from this episode that will provide you with a look behind the curtain of this specific episode. In the meantime, enjoy this. It is a labor of love and idiocy. And yes, grammar Nazi’s I know this write up is riddled with mistakes. Feel free to re-write it and submit it back to us. Or listen to episode and do the write up for me.~TK1

Check out GETOFFENDED.COM! What is Getoffened.Com? Humorous and rude t-shirts and apparel (as well as stickers, posters, jokes and a full dictionary of sex and slang terms) not for the faint of heart. From “Dirty Sanchez” tees to “Cleveland Steamer” sweatshirts…. from “Donkey Punch” Hoodies to “Camel Toe” t-shirts…. even “Shocker” spaghetti tank tops…. GetOffended.com is ready to cover up your hairy chest… You’ve heard it on “The Last Podcaster Standing”, “Bob and Tom”, and “Howard Stern”… you’ve seen it on “South Park” and “Harold and Kumar”… now where it on your chest! GetOffended.com is perfect for that “Hard-To-Buy-For” a$$hole on your shopping list. They even sell panties just for the ladies!… Or really feminine guys! Follow them on twitter under the names @getoffendedcom and @getoffendedBone.

TK1 Just After Waking Up

A Little Too Much Off The Top

Gift Giver Getting The Gift Of Jail