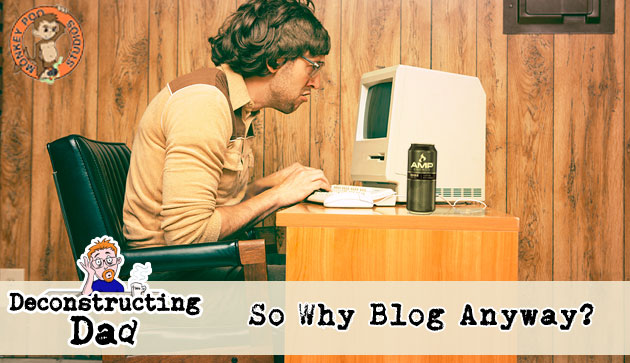 So Why Blog Anyway?

So I’ve been asking myself a lot lately, do I want to continue this blog? How do I pick back up, or start off AGAIN when I barely got started in the first place. A metric fuck ton of shit has happened in the 2 or 3 years since I started this blog thing. Back then I was still content being married. I wasn’t happy with my job. I’m not sure I ever have been happy at any job, but thats a blog for another time. I was contemplating becoming a Stay-At-Home-Dad for a mili second. Hell, I always struggled working two jobs to even put enough food on the table at times… why not switch roles with my wife?

Seems a lot was about to change. 3 years ago I went from working 2 jobs, 7 days a week to getting J-O-B upgrade. Shout out to Neighbor Cole (He’s an actual neighbor) for helping me to get a job with him doing security at a nuclear power plant. My (previous) second, part-time job, had me doing security for a couple of low income (See:Crack/Crazy) buildings, where in hindsight, I should have been armed way more than I am now. So I traded in my flashlight and sarcastic quips for steering away the drunken homeless for better pay and longer nights watching Netflix.

A few months after that I separated from my wife of 13 years. “Separated” having a very strange definition. We’ve spent the last 2 years in this sort of limbo of separation, which inevitably resulted in the long drawn out process of divorce. After one failed attempt, the second, should be finalized mid-April. Having 5 kids with her and figuring out how to manage that new lifestyle and all the pain that comes along with it, helped to keep me out of the blogging game for a bit longer than I wanted… but I’m back!

I’ll be honest, I was urged to just jump back in. Throw some posts up. But that’s just not how my brain works. I felt I needed to say something. Give myself a launching off point. It needed to make sense to me. Shout out to Dougie though, who has been nothing but an amazing friend, and sound board over the last couple of years. (Sorry I didn’t listen to you bro… but now that this is out of the way)

So why Blog? I already podcast. Multiple show’s in fact. Well, I want to find my voice. I want to become a better writer too. It’s also extremely therapeutic, much like Podcasting is for me… and as I’m no longer paying to lay on the proverbial couch, and vent my frustrations, and share my insecurities… I figure what better place to do it, than in a public forum! World, you’re welcome… or is it, I’m sorry?

So what are some of the things I’m dealing with… or might I blog about? The good, the bad, and the ugly of course.

My oldest daughter is just a few months from 18. An actual adult. There’s plenty to mine from there as a father.

One of my daughters has been dealing with some sexual assault issues at school. While I feel it’s not really my place to share her story… it is a difficult thing to deal with as a father. I’ve always said, there’s no instruction manual or guide book to this parenting thing, though sometimes I wish there were. Especially for this topic!

I have an adopted child that I personally struggle with in how to bring that up to her. I’ve read that it’s best that a child grows up knowing and learning about being adopted. It’s not such a shock to them finding out as a teenager. When most teens already don’t feel like they belong in the world, I can’t imagine having that dark cloud of confusion to add to the daily struggles of a not too distant teen life. I have this constant mental conflict on how to let her know that she is nothing except my daughter. Perhaps it’s just best I take this one to the grave?

I’m still going through a divorce, as previously mentioned. Which let me tell you what… I ‘m not sure why I didn’t do this years ago. It’s maybe some of the most fun I’ve had in years! If you’ve ever wanted to become someone’s bitter enemy, split all of your shit, and binge and purge the rest of your belongings, which let me tell you, you’ve not lived till you’ve had to actually become aware of all the shit you’ve acquired over the years. The “Shit” hides in boxes or in plain sight on shelves, it’s even buried deep in closets (there’s a joke in there somewhere) that maybe hasn’t seen the light of day for years… yeah, that’s the stuff that’s particularly fun going through together… with your new and improved bitter enemy! Ok… it’s not bitter. But sometimes it’s easier, and I’ll grant you, uglier, to be angry, when dealing with your ex-spouse.

Okay, It’s not that bad. But drama sells folks. Did I mention we’ve got T-shirts for sale? …It’d be cool if I did! #GoTeamGinger!

Ohhhhh and then there is this whole “Dating thing”. Ugh. The stories I could tell. Enlightening, Embarrassing, Entertaining. Yeah, I’ll throw myself on the fire for you, dear reader, but not today.

Coming soon “2 Years in my mind… and my bed” -A less than self-help novel.

Well here is the first of the new mental dumps, in what will be many in the coming weeks. Come back won’t you?