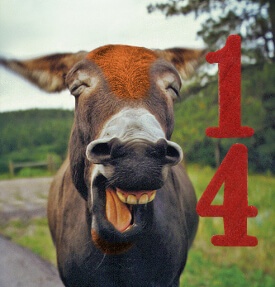 Ginger Kids Genital Grooming A Donkey Before "The Show"

In this, the 14th episode of The Last Podcaster Standing,

What follows is clearly a shameful attempt at writing a disclaimer for this particular episode and its poor quality… The guys make an attempt to have not 1 but 2 callers, both at the same time. This would have worked out great if they had been prepared and knew what they were doing. Lucky for you the listener (insert sarcasm here), they did not. That is why the audio is so poor on this particular episode. One microphone is crammed under the speaker to pick up sound from guest @redwithenvy, and the other audio is a laptop running Skype with sound coming from those massive (again insert sarcasm)laptop speakers, to pick up guest @Eviloi also known as The Google Goddess. Fortunately, after recording this episode, we were able to rectify this egregious error (with help/directions from @somebodyfunny of the “Somebody And Me” comedy podcast) so it does not happen again. With all that dirty laundry out on the line for you to smell, I’ll move on to content… Not that I think anybody reads these anyway…

In Headlines, we discuss some headlines. I can’t for the life of me remember what they were. I think it’s because I’m still red with envy. So after you have listened to this episode, write me and let me know. I think somewhere in here we discussed condoms with Gene Simmons face on them… OH BOY!

And finally we read from the Glossary Of Perversion from our friends at GetOffended.Com… You sexy beasts!

***SPECIAL THANKS this week to ALL of our Twitter followers who have helped support/promote/distribute/push the podcast, which in turn has helped it grow.  Some of these people include, but are not limited to all of those on the previous posts as well as:

Let’s Go For A Ride