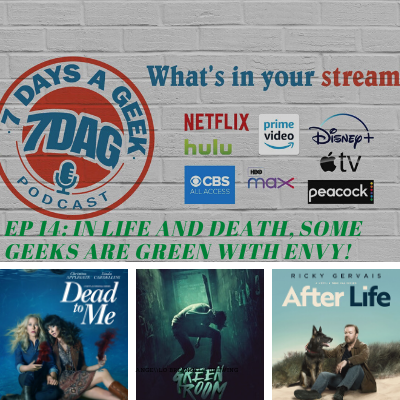 Ep 14: In Life and Death, Some Geeks Are Green with Envy!

Join the geeks again this week as they struggle through a new episode and try not to lose their minds amongst the ensuing technical difficulties!  Don’t worry….the Angry Ginger has spiced things up with some fun little audio to highlight and hide our ineptitude! He’s a consummate professional folks, and he does it all for you!   After riding the struggle bus for a few hours, the geeks get into it reviewing three new shows/series on Netflix, tune in and see which ones they are! Don’t cheat with the willy nilly timestamps!  And of course it wouldn’t be an episode lately without Quad and NC going at it over the WWP! Tune in and see who is the best of the best in the ongoing feud between 2nd and 3rd Mic!

28:00 Catching up with the Geeks (New Bumper from Quad)