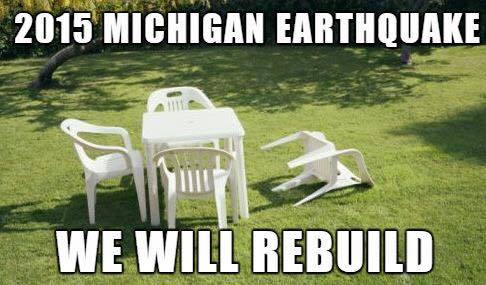 Did We Just Have An Earthquake?

So I’m just sitting at my desk, prepping some upcoming blog entries when all of a sudden it happens! The possibility of death happens. First it starts as a whisper… Something is behind my wall. Then. Nothing.

If a real earthquake could be considered the equivalent of the body having irritable bowel syndrome then the earthquake I just survived was basically the Earth trying to slide by a tiny “Silent” fart…but a bit of a squeeker came out instead. Embarrassing!

You know those farts. The kind that’s brewing and you just happen to find yourself in a public space, with nowhere to escape, but you’re confident that you can get away with it…then SQEEEEEEEEEEK! …and heads turn! Yeah, that’s what happened here. Earth, you should be ashamed of yourself.

Look, I’m not complaining. I live in Michigan, I have to suffer through terrible snow storms and the occasional visit from those windy funnel portals that wisp you off to far away lands.  It’s nice to not have to worry about earthquakes too.  But apparently every so often the earth just has to let one go.

So like I said, I’m sitting at my desk. Deep in thought, when all of a sudden, the lamp next to me starts to wiggle a little bit…causing the light to flicker. Then its moving good enough to where it starts to bounce and rattle between my desk and the wall. Giving off that somewhat Spielberg/Amblin Entertainment kind of vibe.  At the same time, it sounds like club full of people came into my house and started to dance in the livingroom…only they left the DJ in the car. All dance, no music!

This lasted for about 15 seconds…maybe. Long enough for me to think a fleet of dump trucks must be driving past my house.  So I got up from my desk, and made my way up the stairs. Barely a noise as I come above ground. The sounds of a lawn mower eating grass in the distance fills my ears. A couple of tweets back and forth from the birds discussing what I can only imagine to be “who got the bigger worm” and that’s about it. A bit eerie in that just moments ago I was sure to be visited by a Tremor. Oddly enough I was, but I’m speaking more to the 80’s Kevin Bacon flick with those nasty worm type creatures!

Anyway, I make my way down the hallway to the girls room. Alexus and Haeleigh practically live on their beds. Cell phones in hand, one living the social media life while the other is glued to binge watching Netflix like it’s her life force. I peek my head in and say “Did you guys hear that noise?” and Alexus without missing a beat says” Haeleigh’s up there shaking the whole bed again!” but the look on Haeleigh’s face says “Girl your crazy, the bed was moving…but not because of me!” I ask them if maybe a fleet of trucks had drove past the house, and they both look at me like I’m crazy.

“Maybe we had an earthquake?” I question.

Literally within nano seconds of me saying that, Haeleigh looks at her phone and her screen lights up with “Did we just have an earthquake” and “Holy Cow, I think we just had an Earthquake” and much more basic repetitive statements that the tweens would write across their social media platforms.

So of course these days, if you want trusted news…and if you want it fast. Don’t go to CNN. Go to twitter. So I shout out “To The Batcave” and go running back down to my desk. (A.K.A. Monkey Poo Studios for you newcomers) With the girls in tow, I hop on twitter and search “Earthquake” and there are already thousands of tweets from Michigan, Ohio, Illinois, and even Wisconsin where random people are all questioning whether they too just experienced an earthquake. Most of them reading something like “Can Michigan even have earthquakes…because I think I just felt one”.

It took another half an hour for the local news websites to start confirming that we did in fact have one. 4.2 is what it ended up measuring. Of course the destruction left behind doesn’t even compare to the devastation that some have experienced. We’ll pick up our lawn chairs and keep marching on. Though I have a feeling this isn’t the last time I’ll hear about this “Earthquake”.

The Next Day I wake up to this..