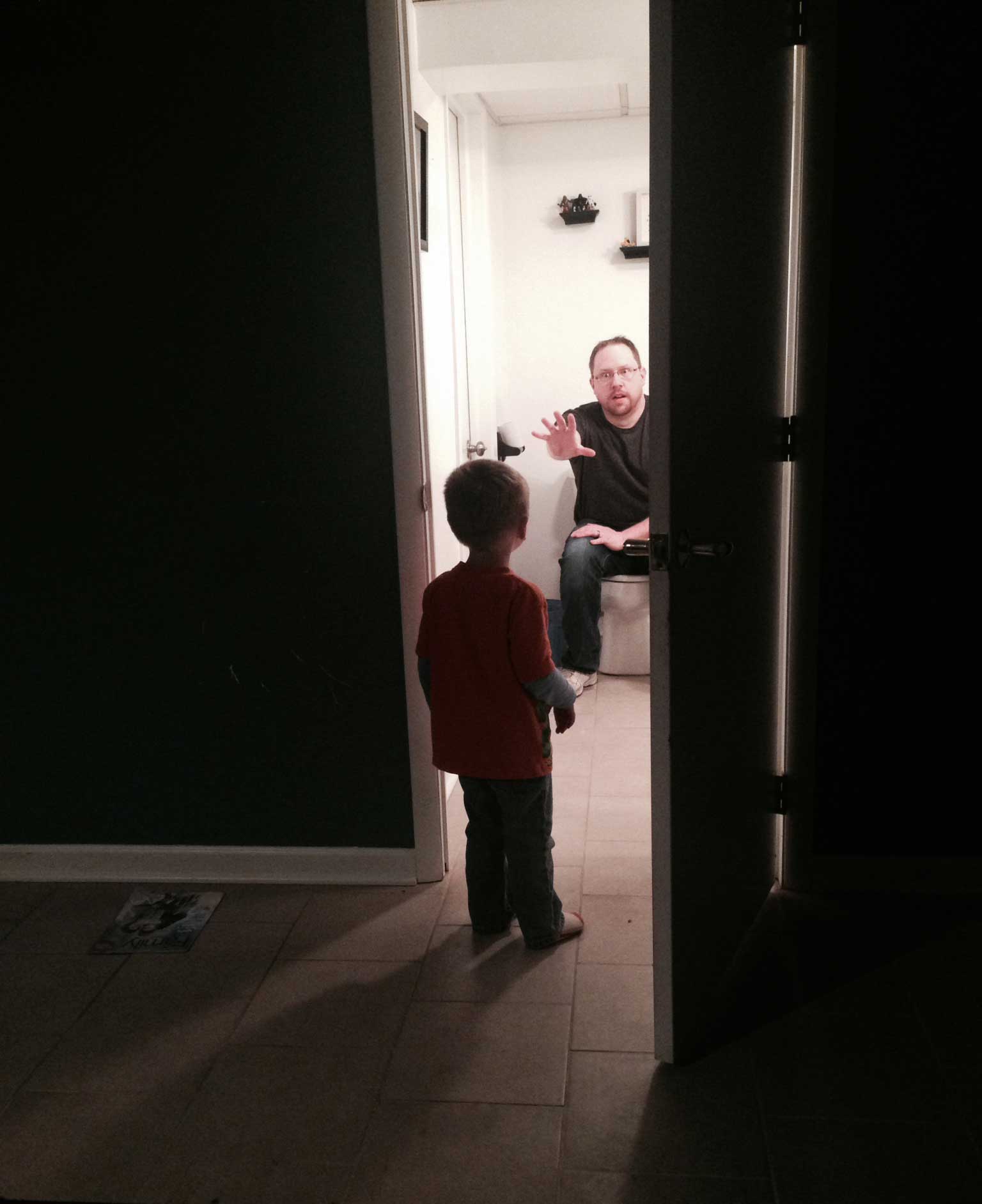 Look, we’re all humans. There are things we all do as humans that…well… we must do. Now, do we have to talk about them? No. But if I lived my life by that code…life wouldn’t be as exciting. So, lucky for you, I’m a sharer! A story-telling gift giver! A modern day…ok, enough hyperbole.

No point in burying the lead here. I poop and I pee (And so do you.)

I don’t poop every day mind you, but I’d like to think that I’m regular enough that I don’t have to pay attention to the commercials on TV. You know the yogurt commercials with Jamie Lee Curtis? Long gone are the days of being stalked by a William Shatner face mask wearing murderer with a penchant for midnight walks through suburbia. Nope, now she’s being haunted by issues of irregularity. The horror!

I too have issues with being stalked, and with irregularity. Irregularity in the form of…this SH*t just isn’t normal!

I have a two year old son. He goes by many a nickname, but his birth certificate says Carter, so it’s probably best you get to know him by that name. Carter likes to follow Daddy around the house. This is normal. While Carter is my first son, He’s my fifth child, so being followed around the house is nothing new to me. What’s new to me are his demands to come and visit me while I’m in the bathroom mid grunt, push and Ka-ploosh!

Now, for whatever reason, the basement bathroom’s door handle doesn’t lock anymore. Convenient right? It’s been years since this has been a big deal. You see over the years of being a father of all girls, I’ve developed a bit of a phobia. Perhaps that’s way too strong of a word, but there is great fear instilled in me. I’m the kind of guy that walks into the bathroom and has to lock the door and double check it like I’m Jack Nicholson in “As Good as it Gets”. I’m a bit O.C.D. about the whole thing. I don’t know how other houses run..I only know how my house runs… and my house has a bunch of free roaming daughters. Doors usually open first…questions get asked last. There have been many times in my career as a parent where I’ve not wanted to answer questions asked from doors being opened on occasions that they shouldn’t have been. Bedroom doors to be exact. Of course usually those questions end up being more off of audible sounds like, “What is all that moaning?” and my wife’s go to response of, “Oh, Daddy’s having a nightmare.” but luckily we’ve avoided the more cringe inducing visual questions.  Ahem…moving on.

Anyway, there lies my fear. I don’t want to be in the bathroom, pants down and mid stream when all of a sudden the door bursts open and one of the kids gets a glimpse of their maker! Not the one in the clouds mind you..no…the one that resides in Dad’s pants!  No! I can’t tell you how many times the door handle has started to jiggle during a nice relieving session of urination, only to be awakened by panic!

Immediately there is this internal race against time, to cut off the free flowing stream, shake it, and tuck it back in behind the now, “Shroud of Urine”! This is no way for a grown man to live.  I do not want my penis to be the first penis they see. Actually, lets upgrade that feeling to, I do not want my Penis to EVER be a penis they see!

So being the only man in the house, I took it upon myself to repurpose the bathroom in the basement as “Dad’s Private Throne Room”, so to speak. Now to be fair, it’s not like anyone wants to attend Daddy’s Bathroom Antics, but kids are kids and they just kind of go where the door takes them. I would just rather prevent any future scarring, for any of us!  Which brings me to now.

Just the other day I was sitting on said throne, doing what it is that we humans do. When all of a sudden Carter finds himself on the other side of my bathroom door. Recently, within the last few months he’s become pretty proficient in opening up the doors in the house. Now, not that it’s a big deal, but if there’s a time for privacy in someones life, Father of Five or not, it’s when he’s using the bathroom. Actually this goes for all of humanity! I’d say there’s a time for privacy for both “Using the Bathroom”, and “Having Sex”,  but there’s a whole industry built around that second one so what do I really know?

I digress. I’m currently trying to teach Carter that he can’t just walk in on Daddy, when he’s using the bathroom. But talking to a 2 year old sometimes is like trying to teach a brick wall to do back flips…it just isn’t happening! So I’ve now turned into the ginger equivalent of MacGyver trying to come up with quick and easy methods of keeping him out while I use the bathroom. (Fixing the door knob is obviously an option that has occurred to me while writing this) I even found some old wiring long enough that I made a hoop out of one end, and fastened it to the handle, then stretching the wire across the bathroom next to the other door leading to the laundry room as a make shift lock! Sure that keeps him out…but the murderous whaling that goes on, on the other side of the door now when I don’t let him in is ridiculous. But alas, I’ve finally kept my peace…or at least I thought I had.

This may come off as a little strange. At least it feels strange. It’s probably normal. Well, as normal as anything else in life isn’t normal…but is. Anyway, Wifey and I are trying to potty-train Carter. This is new to the both of us. Now, we’ve had 4 girls up until him so she handled most of it. They would see her sit down and pee, and we would sit them down to go pee. We’re doing the same for Carter too, but the other day I’m standing in my bathroom with my back to the closed door going to the bathroom when I hear the door handle jiggle. Before I could do anything, in walks Carter. I know, you’re just as surprised as I am. While I try to do the shimmy to the left to keep him behind me, then the shimmy to the right to continue to block the view, another voice sounds off from behind me. It’s Wifey, and she says “You might as well let him see what you’re doing, it’s the only way he’s going to learn!”

SH*T!!!!
So is this normal? Heck if I know. I will tell you that it leaves me with the feeling of having to register myself on some kind watchlist. You know the one’s that shamefully keep you safe distances from Parks, Schools and Chuck E. Cheese’s.  It’s all weird to me, but in the interest of soon saving money on diapers, I get it. Let the kid learn to use the bathroom…but let’s keep it within the bounds of “Daddy’s Bathroom Etiquette”!