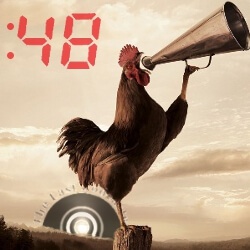 Wake Up With A Little Cock-A-Doodle-Do

In this, the 48th episode of The Last Podcaster Standing:

While taking a trip down memory lane, The Sniper decides to drop a “Dirty Bomb” in the car as he pulls into the gas station to grab a pop.  He doesn’t say a word; pretty sure he doesn’t even realize he’s done it till he comes back to the car.  As he climbs into a car full of passed out podcasters, he notices a few things.  One, it really f***ing stinks in here,  two, why is the Google Goddess passed out with a roll of quarters in her mouth, and three, why is there a half-naked guy humping the back of his car with such force that he actually wakes the podcasters up from their slumber!  The Sniper laughs to himself as he recalls a story he once heard about 3 relatives all having heart attacks on the same day.  As he’s taking a second to fill in the Angry Ginger, Mr. Know It All and the Google Goddess, they all notice the half-naked man is now a fully naked standing at the passenger window complaining that his life would have turned out different had he not thrown an uncooked ham at his mother last week!  This freaks G.G. the f@&k out!  So bad she forgets her “L”s as she screams “(L)et’s  get the f*#k out of here!” Sniper hits the gas and they’re on their way to a frat party where “Cookie” is the game to be played!  Hours later at University, the party has died down and the fellas with their Goddess in tow are ready to pass out!  Angry Ginger is complaining about his missing mole while eating a basket full of “Cookies”! “Where the hell did you get those cookies”? asked Mr. Kia.  “I stole ‘em from some kid who was crying in the corner…something about not wanting to be the “Ookie Cookie Champion”! Ginger exclaimed while he swallowed his last cookie.  “Who ever made these sons of b*$ches must live near the ocean! Salty!” he said while rubbing his stomach were his mole used to be.  Now at the room, they are crashing in for the night.  Kia in his night cap and one-zee cracks open his law book and flicks the light to his hard hat on.  “Gonna do a little light reading”! he exclaims as he settles into his bunk.  The Sniper and A.G. are up to no good.  They found a porn in the room that they’ve never seen before so A.G. wants to go find a VCR somewhere where they can dub it while The Sniper’s idea is just “Pull the f@*king tape from the case, I’ll fix it when we get home”!  None of this makes any sense to G.G. as she pulls up “Cyst Explosions” on her laptop…She smiles to herself, sets her alarm clock then before anyone can see she shoves it down her pants and leans back…waiting for 6 a.m. to come.  Wake up!AG

Little Rooster That Could

Have a quiz, survey, or test for us to take?  Send it to us, we’ll make a show out of it!  Have a story that needs to be told?  Have questions you want answered?  Need advice? Wanna be a guest podcaster? Do you have Skype? Send us an email, drop us a line on Facebook, or post a comment right here in this blog post.

When News Breaks, We Point And Laugh