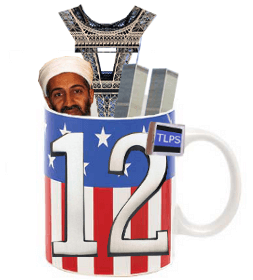 TLPS: Tea Bagging Terrorists Every Chance We Get

In this, the 12th episode of The Last Podcaster Standing

“Shooting The S#!t” this week, The Ninja joins the guys to provide her perspective on Mr. KIA’s marriage proposal, Mr. Kia updates his condom story from episode 10, and a teacher is suspended for stating the obvious about her students.

In Headlines, 3 students give teachers justification to badmouth them whenever they want or kick them in the nuts at the very least. How far would you go to get out of the military? Would you be willing to prove your a “bottom”? Maury Povich pays a girl $500 to violate her probation, a woman reports her daughter was kidnapped to the police that are standing right next to her daughter, and criminals pay $40 to rob a gun store.

“The Male Sack” holds a question from listener Steph Eloi (also known as The Google Goddess) about a stalker she calls the Creepy Creeper. The mere mention of the word “creeper” gives Mr. KIA a nerdgasm and he becomes compelled to gush about minecraft. Yeah! (Insert sarcasm here)

Also discussed from the sack:

1. How much $ would you need to get in order to star in an adult film that no one knows you did and would never find out? How much if all your friends, family, and co-workers knew?

2. Let’s say you are in the mountains of Afghanistan and you stuble across Osama Bin Laden all alone and weaponless. You have a loaded gun with you. What do you do? Do you shoot him on site or do you apprehend him and take him with you so that he can be brought to justice by our government.

3. And finally, we briefly talk about one of our new favorite websites: GETOFFENDED.COM While we do them no justice with our quick mention, this site has some of the best and most humorous swag we’ve ever seen. Cleavland Steamer? Yea, they have that. Donkey Punch? Yea, they have that. Blumpkins? What kind of site would it be without it? Hats, shirts, panties, bumper stickers, sweat shirts, books, and more. They have it all. If you’re not easily offended, this site is for you, if you are easily offended, eat a chode! and GO GETOFFENDED.COM

You guys should know they did not pay us, they did not give us permission, they don’t even know who we are. We just really like their site, and we use a lot of the terms/phrases THEY invented. And you probably do to. Check out their Glossary Of Perversion and buy one for us while your there! If we get one we’ll read from it each podcast. Hiny hint wink wink nudge nudge say no more say no more…

Dine And Ditch Your Daughter

Have a quiz, survey, or test for us to take?  Send it to us, we’ll make a show out of it!  Have a story that needs to be told?  Have questions you want answered?  Need advice? Wanna be a guest podcaster?  Do you live in the Grand Rapids area, or are you willing to drive to Grand Rapids? Send us an email, drop us a line on Facebook, or post a comment right here in this blog post.