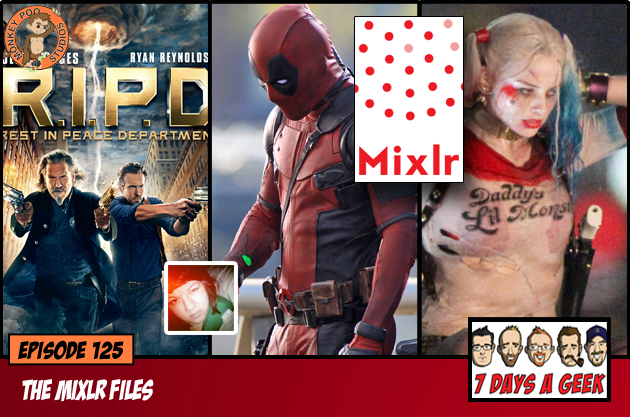 Welcome back to another episode of 7 Days a Geek! Remember when we were live on Radio Fubar? Well, we took measures into our own hands! Now, we’re live on Mixlr!

We start the show off discussing TK1’s return to Monkey Poo Studios and Ginger’s day sweeping the sewer for a set of car keys.

During Trailer Talk we geek out over the new Deadpool trailer as well as Suicide Squad. We discuss our theory’s on the DC Universe and Jerad Leto’s Joker as well as get sidetracked on whether R.I.P.D. was a waste of good celluloid or an actual misunderstood, honest to goodness, fun flick!

In Geek News we discuss not one, but two new Bad Boys flicks. Jumanji is getting a remake as well as Nightmare on Elm Street. Prison Break is returning to television and we’ve got the inside track of who makes up the teams on both Captain America’s Avengers and Ironman’s! Who’s side are you on?