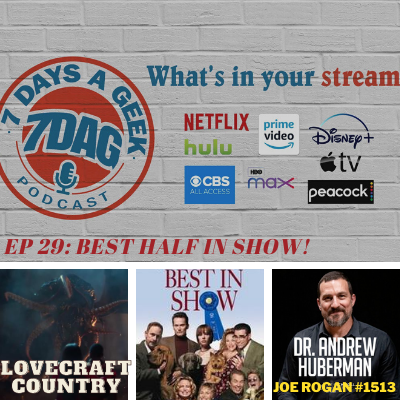 In this episode, Neighbor Cole comes to the mic ready, willing, and available-y ready! Though seething angry at Quadfather’s Weekly Watch Party Pick, he overcomes his rage long enough to give Best In Show a score. Is it a worthy score? Quadfather shows up upon Cole’s exit and brings with him, a neuroscientist! Kinda. We discuss the power of the brain. Stress, Happiness and even Ginger’s 5 stages of current grief.

In Trailer Talk: Lovecraft Country and For All Mankind.

Catching Up With The Geeks: Cole’s almost ran 100 miles this month. No nipple bleeding yet. He goes on a great first date and frees willy.

Quad is all about defending his honor with his choice in movie picks and he’s all about the brain.

Ginger recommends Bert Kreischer’s trifecta of podcasts to keep your week going happy and strong. He struggles to not be angry and discovers ‘other worldly vehicles not of this earth’ as well.

Geeking Out: Friends is the most watched show. Tom Cruise is going to space. Darth Maul is all about the oral. CBS is taking The Stand and Paper Girls is coming to Amazon. We watched Quib’s Dummy, DieHart and Most Dangerous Game. Download the app. It’s worth it!