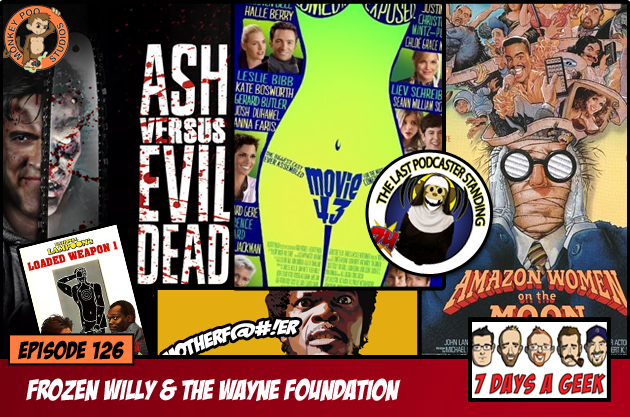 In this episode Ginger has a most embarrassing moment at the doctors. Let’s just say all was revealed, and it will all be revealed to you, the listener as well. So Code and all. This is a very “Hands On” kind of episode to say the least.

The Angry Ginger also becomes less angry and a bit thankful to a group secretly known as “The Wayne Foundation”.

In Trailer Talk we grab our Boomsticks and geek out over Ash V.S. Evil Dead and then we hop in our wagons and head west to visit The Hateful 8.

Ginger also bets TK1 his left nut he is right when it comes to the plot of Movie 43…and upon further inspection and some crazy random happenstance, He’s right…but so is TK1. But Ginger is more right…right?

In Geek News the director of The Fantastic Four loses his marbles. The Black Panther is spotted on the set of Captain America:  Civil War. 100 Bullets gets Mad Max to star and produce and we discuss an expose on TLPS. I’m all for it. TK1 wants it dead!