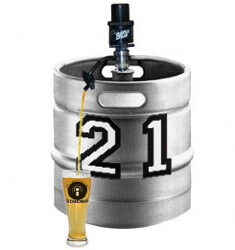 This episode was recorded after Episode 20 (The “Sober” Edition) and after seeing Kevin Smith at the Harris Theater in Chicago. After the show and meeting up with Patrick O’Rourke (and his girlfriend…MARRY her already! What are you waiting for!?) of the Somebody And Me podcast show, we went to a bar close to our hotel called the Elephant and Castle and had a few drinks. After which, we said our goodbye’s and returned to our room… To have MORE drinks! This episode was recorded spur of the moment unplanned. 3 of us were drunk. 1 of us was annoyed and concerned with “volume”. We were lucky enough to be joined via SKYPE by the one and only Akron Bean herself, Stephanie Eloi, also known to our listeners as The Google Goddess. Who took the liberty of moderating the podcast midway through. This is an audio record of that night. Drinks of choice were (in no particular order): St. Paulie Girl, Sierra Nevada, Jagermeister, Belvedere Bloody Mary, and Bacardi.

I should also note during this write up, that I DO NOT have Jason Priestly or any of the 90210 cast for that matter, tattooed on my arm. Or body. I do have tattoos. SURE, at first glance, one might think “what the f$*k is Jason Priestly doing tattooed on your arm!?”… But it’s not him. I $hit you not. So there’s that… And I was young… I’m getting it covered up… Soon… Anybody know a good tattoo artist specializing in cover-ups? OK… Moving on… ~TK1

As always, thank you to our friends at GetOffended.com for providing us with The Glossary Of Perversion. It’s a book you should own. You NEED to own. Find it on their website. Along with the book you’ll find vinyl stickers, t-shirts, hoodies, and even panties! If you have a little dirty in ya, check’em out. If ya don’t have a little dirty in ya, check’em out and they’ll put some in ya. They also give good tweet! Follow them on twitter under the names @getoffendedcom and @getoffendedBone.

Special Thanks isn’t really that special if you thank EVERYONE. We are all unique…just like everyone else. So no more “Special Thanks”. We WOULD like to thank everyone who listens to the show, promotes the show and/or passes it on to friends, family, enemies, and pets.

Oh wait… I lied just now…  Up above… SPECIAL THANKS to Patrick and Lauren from Somebody And Me (@somebodyfunny) for making our trip to the windy city that much more enjoyable. Thanks! You’re special. Now get on the bus!

PIMPIN’ The PODS – Each of the following has a good show and each has a different voice…CHECK’EM OUT- @barelysarcasm, @IAintEvenMadPod, @ParkingLotPod, @Gustosapien, @comedicalchemy, @somebodyfunny, @Never Zero Podcast, @awkwardpodcast, @thegds…If I missed some of you, which is not far from impossible for me, let me know and I’ll add you in.